Below is a summary of the report

A new report by GRAIN documents the importance of milk to the livelihoods and health of the poor in many countries of the global South. Most dairy markets are supplied by small-scale vendors who collect milk from small farmers and pastoralists. But they are under threat from dairy corporations, 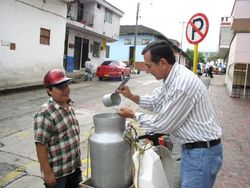 like Nestlé, and other players, like PepsiCo and Cargill, that are trying to take over the dairy sectors in these countries, from the farms to the markets.

•    80% of the dairy markets in developing countries are supplied by these "people's milk" systems, often referred to as the "informal sector"
•    15% of the global population is involved in dairy production
•    Small-scale dairy systems in the South create 200 rural jobs per million litres of milk/year compared to 5 rural jobs per million litres of milk/year in the industrial milk production systems of the North
•    In Pakistan, Kenya and Colombia, fresh people's milk sells for half the price of packaged milk in the supermarket.

Small-scale farmers, pastoralists and vendors are doing an amazing job of supplying the growing markets for dairy in the South. The problem is that corporate interests are after these same markets and they are using heavy tactics to steal them from the poor, while governments are lending a helping hand.

Financial investors and big dairy corporations are joining forces to set up mega dairy farms throughout the South. Cargill's hedge fund is committing $300 million to factory dairy farms in China and India. The world's biggest dairy cooperative, Fonterra, is building farms in China, India, and Brazil on a scale that it could never get away with in its home country New Zealand. A bank in Vietnam is building a 137,000 cow farm. These are social and ecological disasters that will bring hardship to millions of people.

Several actions and measures are suggested to stop the corporate hijack of dairy markets:
•    High, comprehensive tariffs to prevent the periodic dumping of imported milk powder and cheap dairy products
•    A reorientation of dairy production to domestic markets among exporting countries, with programmes such as supply management
•    Food safety systems suited to the needs of people not corporate bottom-lines
•    Boycotts of large dairy companies and supermarkets
•    Divestment campaigns targeted at funds that invest in industrial dairy production in the South
•    Solidarity within and across borders between dairy producers, small-scale vendors and processors, consumers and dairy industry workers

People's milk is up against some powerful forces. But experience in Colombia and elsewhere shows that it can prevail because so many people depend on it for their livelihoods and the well-being of their families. These are the kind of food systems the world needs to deal with poverty, hunger and climate change and we should all be supporting them.

The full report, The great milk robbery: How corporations are stealing livelihoods and a vital source of nutrition from the poor, is available here: http://www.grain.org/e/4259