US interfering in Thai move to ban glyphosate

GRAIN is alarmed by reports that the US government is interfering in Thailand's recent decision to ban glyphosate and two other pesticides, paraquat and chlorpyrifos.
On 22 October 2019, after much pressure from civil society groups like Biothai/Thai-PAN and an alliance of over 600 local and national organisations, the government of Thailand changed the status of the three pesticides from Type 3 to Type 4 toxic substances, meaning they cannot be produced, imported, exported or possessed in Thailand. The decision was taken by the Committee on Hazardous Substances, Thailand's top authority for regulating pesticides, and the ban will come into effect on 1 December 2019. Glyphosate and paraquat are weed killers, while chlorpyrifos is an insecticide. They are already banned or in the process of being banned in numerous countries.1 In fact, the World Health Organisation has determined that glyphosate, the main ingredient in Monsanto/Bayer's RoundUp herbicide, is "probably carcinogenic to humans". 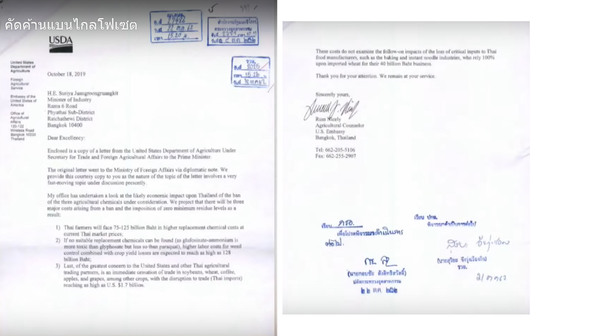 Thai media recently published letters that were sent by the US Department of Agriculture to the Prime Minister of Thailand as well as several ministries.2 The letters make clear that Washington does not want the ban to go into effect. The US stresses that Thailand will lose access to several important agriculture imports overnight, especially soybeans and wheat, of which the US is Thailand's main supplier. That may be so, but it is Thailand's own choice to opt for a chemical-free food supply.
The US has a history of bullying Thailand and other countries when they take action to ban or limit pesticides and GMOs produced by US agrochemical and seed companies. During the negotiations of the proposed US-Thailand free trade agreement in the mid-2000s, Monsanto lobbied the US trade officials to ensure that the agreement would open Thailand to GMOs.3 The talks were ultimately interrupted by the 2006 military coup, but the pressure campaign did raise the stakes, especially for the social movement in Thailand. 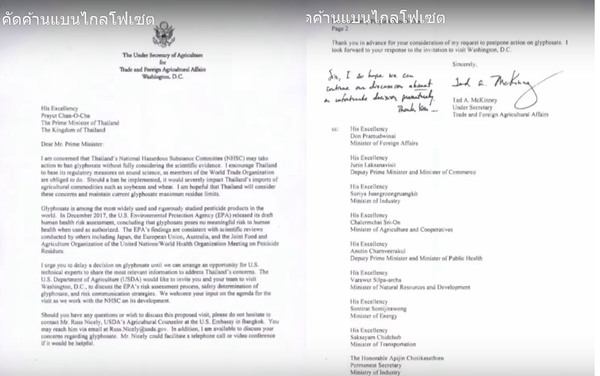 More recently, in Colombia, glyphosate was banned as a tool to eradicate coca production on the grounds that it causes cancer. The Trump administration is now responding with an offer to double its aid package to Bogotá if the country reinstates glyphosate use.4
Today's pressure on Bangkok shows how much the US agribusiness lobby, which earns enormous profit from the production and use of toxic chemicals, drives Washington's trade and foreign policy.
1 An up to date list of initiatives to ban or restrict glyphosate around the world is available here: https://www.baumhedlundlaw.com/toxic-tort-law/monsanto-roundup-lawsuit/where-is-glyphosate-banned/
2 "US glyphosate letter riles govt", Bangkok Post, 26 October 2019, https://www.bangkokpost.com/thailand/general/1780134/us-glyphosate-letter-riles-govt
3 See “Monsanto comments to USTR on US-Thailand FTA”, 8 April 2004, https://www.bilaterals.org/?monsanto-comments-to-ustr-on-us
4 See EFE, "Trump pidió más dinero para Colombia si retoma fumigaciones con glifosato", El Mundo, 12 March 2019, https://www.elespectador.com/noticias/el-mundo/trump-pidio-mas-dinero-para-colombia-si-retoma-fumigaciones-con-glifosato-articulo-844472