Biofortified crops or biodiversity? The fight for genuine solutions to malnutrition is on

A scientist stands outside a field trial of genetically-modified bananas at the National Agricultural Research Laboratories in Kampala, Uganda. (Photo: Christopher Bendana)

“Biofortification is a business strategy, not a solution to global malnutrition.”
— Sylvia Mallari of the People’s Coalition on Food Sovereignty [1]

At the end of 2018, the government of India announced that the use of biofortified rice will become mandatory in all school meals and public nutrition programmes across the country by December 2019. India is one of the target countries for the release of several biofortified crops like iron and zinc pearl millet, iron and zinc rice and provitamin A rice.
Since they were first released in 2004, the use of biofortified crops has been growing in many developing countries. Biofortification is the process of increasing a few nutrients in crops through plant breeding, whether using conventional techniques or biotechnology. From Peru to Tanzania to Indonesia, governments are accepting these crops with open arms. National agriculture research agencies have made biofortification a priority and donors are putting a lot of money into it. The argument that this is a cheap way to address malnutrition seems to have won governments over. But do they really address health problems? Who is behind them and what is their agenda? Could they actually make things worse?
GRAIN took a look at the current status of biofortification in Asia, Africa, and Latin America and the emerging critiques from feminist perspectives and food sovereignty movements. What we found is a worrisome push for a top-down and anti-diversity approach to food and health that may ultimately undermine people’s capacities to strengthen their local food systems.
Key takeaways
Background
The Green Revolution—which from the 1960s onward focused on breeding new varieties of a few staple crops like rice, wheat and maize—raised calorie consumption in developing countries but helped destroy diversity in farmers’ fields. Although it is often credited with solving world hunger, sixty years later 821 million people remain undernourished (lacking calories) while two billion are malnourished (lacking essential nutrients), according to the United Nations Food and Agriculture Organisation (FAO). Malnutrition impacts women and children most severely: the FAO finds that it is still responsible for more than half of child deaths in developing countries.
It is well known that a diverse diet rich in vegetables, fruits, legumes, nuts and whole grains provides all the nutrients needed for good health.[2] Yet in the last several decades, agricultural research has focused almost entirely on raising yields of just a handful of crops, notably cereals, with little emphasis on nutritional quality. Studies in the United States show that today’s food contains lower levels of iron, zinc, protein, calcium, vitamin C and other nutrients than in the past.[3] For example, scientists at Washington State University analysed 63 spring wheat varieties grown between 1842 and 2003 and found an 11 per cent decline in iron content, 16 per cent decline in copper and 25 per cent decline in selenium.[4] Similar studies have been done in India, the UK and elsewhere, confirming what is generally viewed to be a global trend.[5] Breeding is largely to blame for decreased nutritional quality, followed by soil depletion and production methods.
In the mid-1990s, scientists at the Consultative Group on International Agricultural Research (CGIAR), the global consortium of research institutions that spearheaded the Green Revolution, decided to bring nutrition back into the picture. But rather than turn to diversified farming, varied diets, local knowledge and agroecology as the solution, they chose to stay on the same path. That meant continuing to promote monocultures and focusing on just a handful of crops. Diets would remain monotonous, or become even more so, but centred on "nutritionally enhanced" foods.
A word about terminology
Proponents of biofortification often use deceptive language to promote biofortified crops—starting with the word “biofortified” itself. As social movements in Brazil point out, the word suggests that all other foods or plants are inherently weak or deficient. Terms like “golden rice”, “super banana” and “orange maize” really amount to marketing strategies to convince consumers that the biofortified versions of these seeds or foods are superior to their non-biofortified counterparts. These names, not to mention the crops themselves, are sometimes registered as intellectual property, even if intended to be used free of charge.
For the purposes of this report, we choose to speak of provitamin A maize or iron beans, indicating they are bred to be high in that nutrient—instead of using other adjectives (like “super”) or colours (“golden”), which are primarily marketing lingo. We specifically say provitamin A, not vitamin A, because these crops carry betacarotene, which only becomes vitamin A through our bodies’ metabolism after consumption.
We also found it important to use the phrase “genetic modification” and avoid the word transgenic since new breeding techniques like gene editing result in GM crops even though they are not transgenic.
Global overview

“It's really just as simple as that. We just need to take all the white maize in Africa and switch it over to orange maize.”
—Dr Howarth Bouis, 2016 World Food Prize winner for biofortification [6]

Global research on biofortified crops is led by the CGIAR system, with research currently underway to develop biofortified rice, wheat, sorghum, banana, lentil, potato, sweet potato, cassava, beans and maize. This work is managed across three CGIAR units: the International Rice Research Institute, focusing on genetically modified rice; the International Potato Centre, focusing on sweet potatoes; and the HarvestPlus programme, which coordinates all the rest.
What is HarvestPlus?
HarvestPlus is a programme of the Consultative Group on International Agricultural Research (CGIAR) and operates under the CGIAR Research Program on Agriculture for Nutrition and Health. The work of HarvestPlus is coordinated by two of the CGIAR’s 15 international research centres: the International Food Policy Research Institute (IFPRI) in Washington DC, where HarvestPlus is housed, and the International Research Centre for Tropical Agriculture (CIAT) in Cali, Colombia. Its main goal is to get biofortified crops in the hands of farmers throughout the global South.
HarvestPlus was formally launched in 2003 and is mainly funded by the UK (which provided 41 per cent of its funding in 2017), the Bill and Melinda Gates Foundation (30 per cent), the United States (9 per cent) and the European Union (6 per cent).
More information: https://www.harvestplus.org. 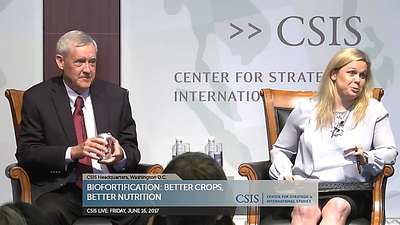 Busted! Dr Howarth Bouis, the “father” of biofortified crops, gives a speech about the fight against malnutrition and then
downs a Diet Coke. Right. While there are 40 nutrients that we must get from our food for good health, these institutions only focus on three: zinc, iron and vitamin A. Why? According to the director of HarvestPlus, “of the 40, these are the three recognised as the most widely spread, significant public health problems.”[7] But the multi-stakeholder World Nutrition Report questions this claim.[8] And some researchers question whether biofortification initiatives are legitimatising a reductionist focus on vitamin A, iron and zinc deficiencies.[9]
To date, about 300 biofortified crop varieties have been developed and released worldwide with support from HarvestPlus and are now grown by 10 million farmers and consumed by 30 million people (see table). While this is still a very small portion of the crops grown by the developing world's 1.5 billion farmers, the CGIAR hopes to significantly increase the reach of biofortified crops in the next decade. Its goal is to make biofortified crop breeding the default strategy, so that it may account for 90 per cent of the global food supply.[10]
So far, none of the biofortified crops released to farmers have been genetically modified (GM). However, quite a number are in the pipeline (see map). While HarvestPlus has expressed concern that people will confuse “biofortified” with “GM” and reject it, the development of biofortified crops is clearly moving from conventional breeding to genetic modification. 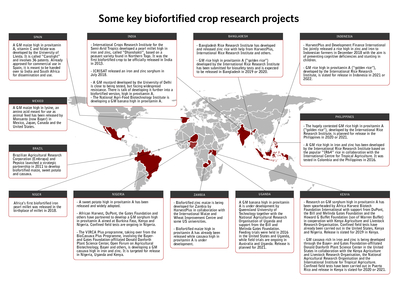 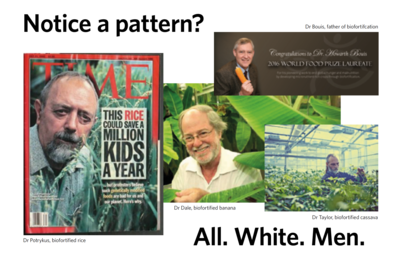 Biofortified crops are part of a very Western and very white male approach to what food and agriculture should look like: capitalist markets, serviced by formal scientific research.
Promoters of biofortified crops argue that biofortification is the most efficient approach to addressing micronutrient deficiency among low-income communities who cannot afford to buy diverse foods like fruits and vegetables. But participatory research in Andhra Pradesh and Telangana with adivasi and small peasant communities shows that traditional farming systems provide diets are already highly nutritious, supplying ample levels of vitamin A, folic acid, vitamin D, zinc and other micronutrients.[24] So the question is which system you choose to promote: diverse traditional diets based in diversified farming systems or replacing these diverse systems with a small number of “nutritionally enhanced” crops.
Dhaka-based UBINIG has conducted research showing that people are concerned about monocultures of biofortified crops such as zinc rice destroying the ecological foundations of farming in Bangladesh.[25] There is also concern about targeting women and children as a marketing ploy for biofortified crops. As they put it, “While it is true that women and adolescent girls suffer from nutritional deficiencies that have led to high percentage of stunting (40 per cent), the solution is not to have a ‘capsule-like’ food such as industrial varieties of biofortified rice. Rather, we need to shift to biodiverse agriculture.”[26] Bangladeshi people do not consume rice alone, they point out, but with vegetables, fish and lentils. Even the very poor will also have potato, spinach and lentils along with rice. The distribution of new biofortified rice and wheat in Bangladesh is not based on evidence, but rather on the assumption that poor women are zinc-, iron- and vitamin A-deficient. In fact, poor women recipients are frequently unaware of why they are being given biofortified rice.
Rural communities and women’s groups across the region view diversified local food systems and traditional diets as the real solution to poverty and malnutrition. Many of these communities are actively resisting the takeover of their crops, livestock, territories and cultures. As part of these struggles, women are fighting to maintain their traditional knowledge as the foundation of health and culture, such as knowledge of different uses of leafy greens and other foods found in forests and semi-arid areas where they live.
On the ground in Africa
In Africa, which is always portrayed as a hungry continent, biofortified crops are marketed as a magic bullet for addressing nutrient deficiencies. The president of the African Development Bank, Dr Akinwumi Adesina, stated: “Biofortified crops are going to be game-changers with dealing with the issue of malnutrition in our world today.”[27] In 2018, the African Union went so far as to adopt biofortification as a new food security strategy for the continent. However, Africa has rich local food cultures informed by locally-specific social relations in which women often play a central role. The push for biofortification on the continent is therefore met with scepticism in many circles.
Status of biofortification in Africa 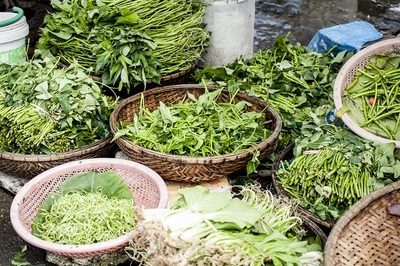 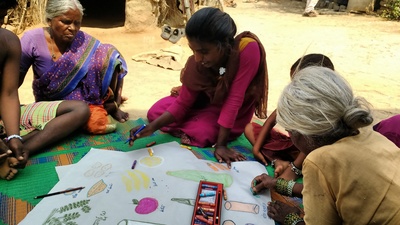