Unravelling the Socfin/Bolloré plantations, thanks to Profundo

In February 2020, the independent Dutch research outfit Profundo published a guide to the corporate structure behind Socfin's oil palm and rubber plantation activities in Africa and Asia. [1] Socfin is a holding company based in Luxembourg. Its main shareholders are Hubert Fabri (Belgium) and Vincent Bolloré (France) and their families, who are bound together in numerous business partnerships.
Through a vast network of holdings and operational companies, Socfin controls about 400,000 hectares of land concessions in ten countries. Half of that land area is currently in production as industrial plantations.
What Profundo did in their report is explain the relationships behind Socfin's operations in a very clear and pedagogical manner. We see better than in other documents, for instance, that the Bolloré group’s participation is not limited to its direct 39% holding of Socfin. The French group also holds 22% of Socfinasia and 8% of Socfinaf which are both majority-owned by Socfin (which is, again, co-owned by Bolloré).
We also learn that while 2018, the last year for which full data is available, was not a good year for palm oil or rubber prices worldwide, the Fabri and Bolloré family members who sit on the boards of the different companies took home an estimated EUR 30 million in dividends and remunerations. That's equal to half the profits that the entire Socfin operation generated that year!
To help share Profundo's report more widely, we generated two infographics from it. [2] One reproduces a chart found in the report which displays the ownership structure of the plantations and the revenues derived from them. The other summarises the report’s findings about who benefits from this. 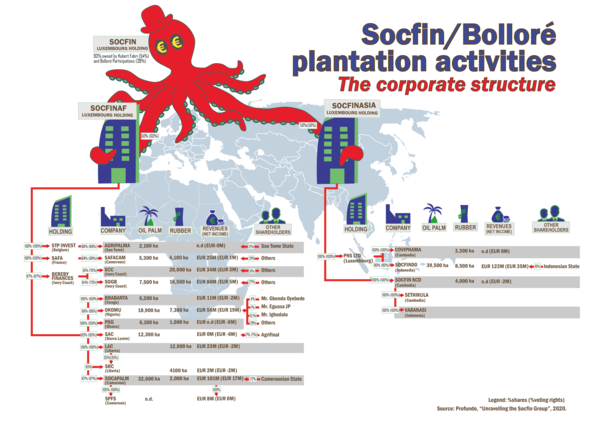 The report does not explain how communities are affected by these plantations on the ground. That kind of information is available from communities themselves and captured in many reports produced by their alliances and allies. [3]
We hope these infographics may be useful as educational tools for strategy discussions among villagers affected by these and similar plantations, as well as their NGO allies.
_________________________
[1] To download Profundo's report in English or French:
https://www.profundo.nl/projecten/unravelling-the-socfin-group
[2] To download the infographics prepared by GRAIN for printing for printing in poster format: Who benefits ; The ownership structure of the plantations & the revenues derived from them
[3] For information on how communities are affected and fighting back, see the collective repository maintained at farmlandgrab.org:
https://www.farmlandgrab.org/cat/show/700