Sowing seeds of resistance: the fight for food sovereignty in Palestine

by Sandra Guimarães and Anne Paq | 25 Jul 2019
Saad Dagher, considered a pioneer of agroecology in Palestine, at his “Humanistic Farm” in the Salfit region. (Anne Paq)

This article is accompanied by a mini-documentary. Click here to watch.
Food sovereignty in Palestine is inextricably linked to the fight for self-determination. Land dispossession in Palestine began in 1948 when 78 per cent of historical Palestine became Israel. Since 1967, the remaining 22 per cent of land – now referred to as the ‘Palestinian territories’ – has either been occupied or is controlled by the Israeli army. The separation wall, the buffer zones, the illegal Israeli settlements and the military exclusion zones within these territories are slowly stripping the indigenous people of all farmland and water resources.
Add to that the restrictions on freedom of movement and the regular attacks waged by Israeli settlers against farmers and their crops and you will understand why the agricultural restrictions imposed by Israel cost the Palestinian economy US$2.2 billion a year and why 31.5 per cent of the population is food insecure, according to the United Nations.
Agronomist and farmer Saad Dagher is a pioneer of agroecology in Palestine. He explains that the people from his region, north of Ramallah, were all farmers until the 1970s, when things steadily began to change. “When the first person from the village left the land to work in an Israeli factory, in 1975, the community saw it as an act of treason against the Palestinian cause. But it was a quick way to make money, which gradually led people to abandon their lands.”

In 2019, according to an International Labour Organization (ILO) report, the lack of opportunities on the Palestinian labour market was such that nearly 127,000 inhabitants of the West Bank have to rely on work in Israel and the Israeli settlements.

Dagher grows around 100 fruit and vegetable plants on a small plot of land in the village of East Bani Zeid, to feed his family and also to sell on the local market. “In the past, the olive groves were not occupied by olive trees alone; there were also fig trees, vines, cereals, like corn and barley, and legumes, like chickpeas and beans. But these crops require more care, so they were gradually abandoned and only the olive trees were left. The Palestinian farming practices of today are far removed from traditional methods.”
The more Palestinian farmers become cheap labour on the other side of the Green Line, the more captive a market Palestine becomes for Israel, which controls the borders. “We are a nation under Israeli occupation and we need to produce food that will make us stronger and more independent. We were no longer producing enough food, and we have become dependent on the produce from illegal Israeli settlements, which are full of pesticides,” says the farmer.

Aware of this phenomenon, Palestinians are stepping up initiatives aimed at reversing the trend and building their food sovereignty. In the Palestinian town of Beit Sahour, for example, a seeds library has been created, a collection of heirloom seeds that farmers can borrow and share. On returning home after many years abroad, Vivien Sansour, the woman behind the project, discovered that many local fruits and vegetables were disappearing or had already disappeared.
For Sansour, losing fruits and vegetable such as the white cucumber or Jadu’l watermelon that she had missed so much when she was far from Palestine was like losing part of her identity. So, in 2014, she started collecting the seeds of plants that were dying out, and that was how the seeds library project came into being.

The ‘seed guardian’ does not, however, view the occupation of Palestine in isolation from the global context. “You’re not a producer anymore, you’re a consumer, and what better way to enslave someone than by turning them into your consumer. This is happening all around the world, but here it is doubled with the military occupation,” she explains.

“I don’t think it would exist without all the other connections in the world that make such a brutal military occupation exist. But it’s not only a military occupation we live under, it’s the greater political and economic system in the world that is causing us to be slaves to agri-business companies and multinationals,” she adds. Cataloguing and preserving seeds is a form of resistance that Sansour calls ‘agroresistance’.

Not far from the seeds library, in the town of Bethlehem, is the Dheisheh refugee camp. Over 700,000 Palestinians had to leave their homes and their lands after being expelled by Zionist forces when the State of Israel was created in 1948. They settled in camps which are still there today, 70 years later, but with a population that has grown from one generation to the next. The Palestinians are still waiting for a political solution guaranteeing their “right to return”, a principle established by a UN resolution in 1948.

Built in 1949 for 3,000 refugees from 45 villages, the Dheisheh camp now houses 15,000 people, on a surface area of less than one square kilometre. It is one of the largest refugee camps in the West Bank.

Most of the Palestinian refugees were originally farmers, but life in these over-populated camps has left them detached from the land, which for millennia was such an essential part of their identity.
“It is almost impossible to buy land now,” says Dragica Alafandi, who lives with her family in the Dheisheh camp. Alafandi was born in Bosnia and settled in Palestine with Mustafa, her husband, a Palestinian refugee, in 1994. A few years ago, she started growing herbs and vegetables in pots on her rooftop, to increase her family’s food autonomy. In 2017, she received a greenhouse from Karama, a community organisation based in Dheisheh, which has been promoting a rooftop micro-farm initiative since 2012, helping the women of Dheisheh to create vegetable gardens.
Water in the Palestinian Territories is controlled by Israel, under the terms of the Oslo II Accord of 1995, and having enough to keep the micro-farm alive is Alafandi’s greatest challenge. “The limited water supply is quite difficult to manage. We get water every 10 days or so, for 24 hours. Sometimes less.” Then there’s the fact that Palestine has been under military occupation for decades, which means that there are regular surges in tension, especially around the camps. “There are Israeli soldiers shooting almost every night and teargas bombs flying everywhere. Our rooftop is quite high, but I am always afraid they’re going to destroy the greenhouse.”

Preserving health of body and mind

Whereas the countries of the North are now taking an ever-keener interest in the quality of their food, the countries of the South are being flooded with the industrial food they produce but no longer want to eat. If you go to a supermarket in Palestine, you will find mainly processed foods, full of cheap sugar and oil, bearing the logos of the same brands as everywhere else in the Western world, and often with labels in Hebrew, coming directly from Israeli suppliers. The alternatives available to Palestinian consumers are very limited.
The impact on people’s health is disastrous. “When you destroy someone’s health, you also destroy their spirit,” says Sansour. “You’re telling them they are not worth anything. That’s when the occupation really wins. When we start to believe we are trash and we start to eat trash, when we start to live as if our lives don’t matter.”
Since Alafandi started to grow her own food, she has seen a change in her family’s eating habits. “We eat a lot more salads and soups now. We’re not able to grow everything we need, but when we prepare the few things we are able to grow here, it’s always special.”

For Sansour, the best form of resistance is “to refuse the dialogue of your oppressor, to say, ‘I am not trash and I’m not going to eat your trash’. I think we can all choose to make our lives a little bit more tolerable during these times. Because we will be free. Not right now, but we will be. I feel free when I have these seeds in my hands.”

It is not just about preserving seeds or growing vegetables at home. It is also about taking back control over certain aspects of life, in a place where everyone’s lives are controlled by the Israeli military occupation. “I do not only grow plants for food,” explains Alafandi, “I also grow plants for their therapeutic value. It’s also good for the spirit. My children love coming here. They enjoy simply sitting here and being surrounded by plants. Dheisheh is all concrete and metal, so this garden is a little treasure. In the camps, the rooftops are used as a little escape, when we have nowhere else to escape to.”
This article is accompanied by a mini-documentary. Click below to watch : 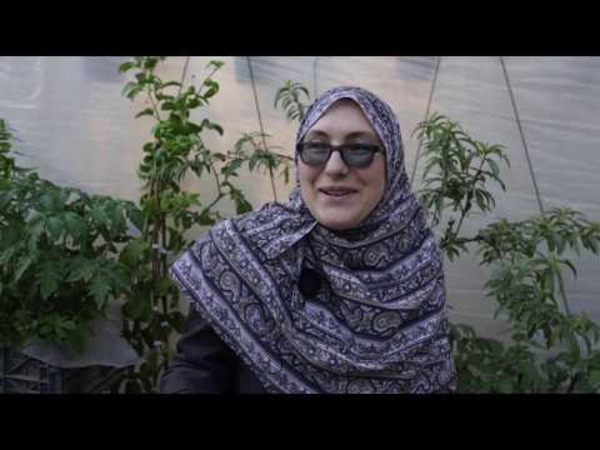 This story has been translated from French. This article is part of the Baladi – Rooted Resistance multimedia project exploring agro-resistance in Palestine.
Source: https://www.equaltimes.org/sowing-seeds-of-resistance-the
Author: Sandra Guimarães and Anne Paq
Links in this article: